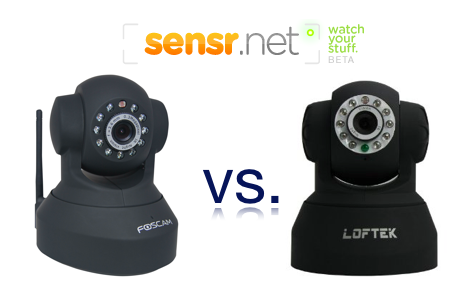 LOFTEK’s CXS 2200 and Foscam’s FI8918w are incredibly similar – both in specs, and obviously in appearance. I’m going to break down the key differences between the two, and tell you which one I think offers more for the cash.

LOFTEK’s CXS 2200 is a great entry-level network camera. $60-$70 buys you night vision, high quality picture, PTZ, and great motion detection. Despite potential challenges in setup due it its lack of DHCP support, you can’t go wrong buying a CXS 2200 for the price. Pro tip: the default IP is 192.168.0.178.

Here are a few clips I made with the LOFTEK CXS 2200 on Sensr.net in my testing.

Foscam’s FI8918W is also a great entry-level network camera, though slightly more expensive than the CXS 2200. Its image quality isn’t as good, but setup was painless due to native DHCP support.

Here’s a clip of the Foscam FI8918W recorded on Sensr.net.

The Foscam FI8918W wins hands down in ease of setup. It supports DHCP, and actually shows up on your router’s client list when you plug it in. You know its IP right away as it has a sticker with the device’s MAC Address on the bottom of the camera. The LOFTEK is not only missing a sticker with its MAC Address, but it also comes preconfigured with a static IP address, which is unadvertised as far as I could find. My router also didn’t detect that any new devices were plugged in, and still doesn’t, despite the fact that I got the camera set up successfully.

Want to learn more about my LOFTEK CXS 2200 setup hell? Check out my last blog post about it. And if for any reason you are having trouble getting the Foscam setup, we’ve got a guide on how to configure the Foscam FI8918W as well.

LOFTEK’s CXS 2200 is markedly better than the Foscam FI8918W in picture clarity. It’s a little hard to tell with the lower resolution I’m posting for readability, so I’d suggest clicking the links to see the full shot in 640×480. The flowers were photographed at the same distance, in the same light, and at the same angle. Scratch one on for LOFTEK CXS 2200! 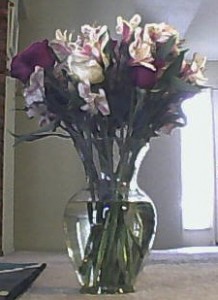 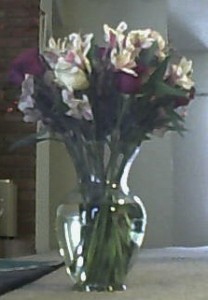 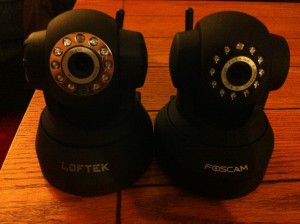 The CXS 2200 and FI8918W have essentially identical features advertised. They’re both equipped with full PTZ, wifi, night vision, two way audio, and have 300k pixel sensors. They even look the same. In my testing, neither cameras have noticeably outperformed the other in night vision clarity. The infrared goes reasonably far on each of them (up to 8 meters), but it’s not going to blow your mind if you’ve used a night vison camera before.

This is mostly anecdotal, but in playing around with each of them, the LOFTEK’s motion detection seems to be a little more sensitive, even with them at the same setting levels. This can be good or bad, depending on what exactly you want to use your camera for. If the wind slightly moving a tree in the upper right corner of your camera’s line of sight is making your motion detection alerts go nuts, you’ll probably be annoyed, but that’s the rub I guess. Trim your branches!

PTZ works the same on each of them more or less, but Foscam’s got one up on LOFTEK if you buy their Surveillance App for $5, which allows you to remotely control your camera’s PTZ functions from an iPhone/iPad.

All in all, I’d say the two cameras tie in their features. Give them each a point!

The CXS 2200 and FI8918W are both excellent, inexpensive entry-level network cameras, and you really do get more than your money’s worth in each of them. But that’s not fun – this is a matchup review, and I’m obligated to declare a winner! Though the Foscam is easier to setup, the image quality isn’t nearly as good as the CXS 2200. And for $15-20 less, LOFTEK is a clear winner. With nearly identical features and the CXS 2200 outperforming the FI8918W in picture clarity, its $60-$70 price point seals the deal. 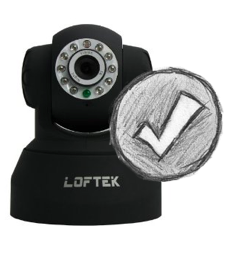